This blog is based on the presentation I gave at the Workplace Trends conference last week, which in turn was based on a presentation I gave at an Innovation Exchange in Lisbon. The room was full of scientists presenting their latest inventions and chemical formulas, and they asked me to present on how the workplace design could assist them. Well I’m always up for a challenge and an all-expenses paid trip to Portugal.

The subject of creativity and innovation is much broader than advances in science. In the UK, we have a tendency to lead in new economic eras only to lose our edge to overseas copycats. It happened with the secondary economic sector, manufacturing like automotive, and it has happened more recently with the tertiary service industry. But we have entered a new quaternary economic age, that of innovation, and as workplace specialists one of our most important jobs is to facilitate innovation and creativity in our workforce. Innovation doesn’t just apply to the creative industries – having a good idea applies to all areas for example creating more efficient process or better customer service as well as new products.

When reading around the subject I found lots of research on creativity. However, it was mostly reported in the business management literature (check out Ideo’s recent survey) or in neuroscience research papers. There was relatively very little on environmental impact. So, does this mean workplace design is considered not important or just not considered?

These spaces, above, are clearly innovative workplaces but are they spaces that foster innovation? Do slides, bean bags, games, grassy seats or trampolines result in higher creativity? Well possibly, a little, but I think innovation starts with people – psychology and culture, rather than with design gimmicks.

I love this quote from Nadya Direkova of Google:

“The garage is my kind of playground. When you come in you can write on the tables, you can write on the walls and then you can reconfigure the tables to be in any position you want. Everything is on wheels and that allows people to be flexible and be more playful in a way that a typical space and typical conference room just wouldn’t”.

This high-tech company seems disproportionally impressed with their garage, where the furniture has wheels and they can write on the walls. But it looks funky too and whilst I slightly mock them it probably does foster innovation more than the traditional "bored room" or sterile meeting spaces. But a key difference is the people and their attitude and mission.

Consider where are you most creative, where you have your best ideas? It’s no coincidence that Archimedes has his “eureka” moment in the bath. A lot of people, I and others have asked, get their eureka moment in the shower or in other solitary activity. It’s ironic that we get our best idea in the shower then get on a train to travel into the office – try spending the morning in quiet space developing your idea before rushing onto the office to verify it with your colleagues. Other common places are a run or walk in the park or even an undisturbed moment on the train. And yes we also get ideas when brainstorming and socialising with colleagues. I think I get my best ideas in the pub, but the next day they don’t always seem as good, that’s if I remember them. These places that spark an idea imply agile working might help the creative process, as well as bringing greenery into the workplace.

In a survey I conducted on behalf of Herman Miller, I found that different types of meeting space support different types of interaction. Meeting rooms are great for didactic presentations and sharing information but they are not considered so good for creating ideas; more informal spaces are preferred. When asked about spaces for creativity inside and outside the offices we were surprised that the home was considered by most to be their preferred space. Of course, the home was also the most preferred space for concentration. Note concentration can mean working without interruption or distraction but it may also mean thinking things through and developing ideas – more akin to contemplation.

I got my respondents to complete a personality inventory; the Big Five or OCEAN scale. Those who score high on the openness personality trait are more open to new ideas, more creative and more artistic. I found those more creative disliked formal meeting spaces and preferred to meet in small groups in huddle rooms or breakout spaces. Unexpectedly, I also found they also spent more time at home than their less creative colleagues. 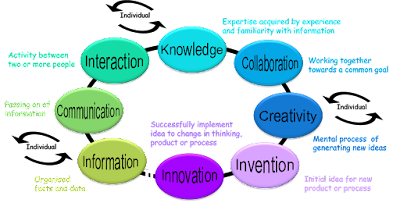 I think the time at home is because of the “Innovation Cycle”. In an earlier paper that my colleagues and I at Alexi Marmot Associates came up with the cycle. It’s not as rigid a process as the diagram implies but we know that:

So, our creatives are using their home, rather than the office, to develop their new ideas.

I want to move on now and share with you some more-academic research on creativity. One way researchers measure creativity is using methods such as divergent thinking tasks. The task was developed by JP Guilford during the war when he observed the innovative tactics of fighter pilots. The idea is that you come up with as many original ideas as possible for inanimate objects, such as a house brick or paper clip. 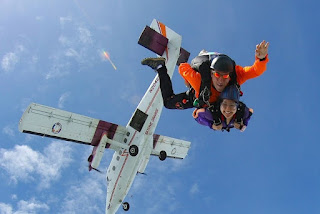 I caught a great BBC Horizon programme a few years ago which pointed me to the latest research on inspiring creativity in the workplace. For example, Simone Ritter, at Radboud University in the Netherlands, tested divergent thinking after being exposed to new experiences, which she created using virtual reality. She proposed that people get “functional fixedness” where we get into a standard routine and become stale. To disrupt it we need unexpected experiences to unlock the synapses in other parts of the brain and create new pathways. New experiences might be jumping out of a plane but it can also be taking a different route to work, sitting next to new people, going somewhere different for lunch, or using a different approach to doing the same tasks. In her study, those immersed in her virtual simulations of dislocated environments improved their scores on divergent thinking tests by 15%. Workplace design should encourage people to take new routes to a desk or work in different areas with different people.

In another study, Jonathan Schooler of the University of California, asked volunteers to conduct divergent thinking tasks before and after three exercises with Lego. He found that people came up for more uses for the house brick when they were conducting a mundane task (sorting Lego) rather than doing a complex task (building a Lego house) or just taking a break doing nothing. Schooler believes that working in this auto-mode results in a transient dip in the frontal lobes of the brain. The frontal lobe is known as the seat of consciousness and works hard; it is used for problem solving, making decisions, memory, language and planning to name a few. The dip, or brain blinking, is linked to insight as it allows subconscious brain activity to become conscious. 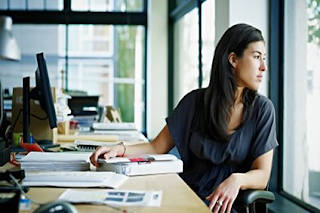 Daydreaming in the office is often considered unproductive – I think this is one reason why people like their own office, so they can daydream without having to explain themselves. But daydreaming, or more accurately mind wandering, allows us to archive information, moving it form short-term to long-term memory. Kalina Christoff, of the University of Columbia, used imaging to confirm that mind wandering evokes a unique mental state that allows opposing regions of the brain to work together. More recently, Schooler and his colleague Zedelius explored how mindfulness and mind wandering help with solving creative problems. They found that mindfulness was related to using analysis and logic for problem solving whereas mind wandering facilitated problem solving through insight, a spark of an idea.

The term Biophilia has been around for some time, coined by Wilson in 1984, and evolutionary psychologist Stephen Kaplan has promoted the benefits of biophilic design since 1995, but Biophilic Design has only been in vogue for last few years (see my review). Kaplan proposed Attention Restoration Theory which implies our ability to concentrate is restored by exposure to natural environments. People feel refreshed because nature provides a setting for “non-taxing involuntary attention” enabling our capacity for “directed” attention to recover. 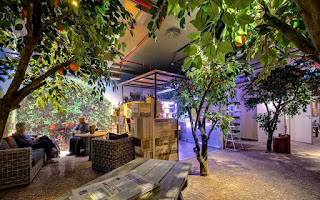 In a recent on-line survey of 7,600 respondents, those working in biophilic environments reported 15% greater creativity. There have also been several studies which have shown the impact of biophilic environments on creative performance tasks. One of my favourites is a study, by Atchly, Strayer & Atchly of Kansas University, where they compared performance on a series of creativity tasks before and after 4-6 days of back-packing in the wilderness. They found an amazing 50% increase in performance. We all know that we get the best ideas when we are least expecting it – when focussing on other tasks the mind wanders. Much of the research on insight concludes “get up from your desk and walk away from the problem”. Go for a walk, a run, or do meditation, and do it in a natural environment. 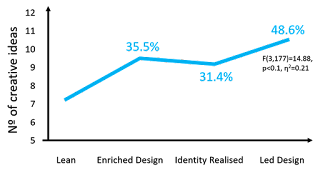 There have also been studies showing how bringing nature into the workplace can also have a positive effect. Craig Knight has done much research on the impact of plants and enriched workspace on performance. Craig also prefers using performance tasks, such as divergent thinking, to questionnaires. He found a significant increase in divergent thinking tasks between those in a simulated lean office and an enriched one. Craig has recently completed a study in a real office and found similar results; look out for his published paper. 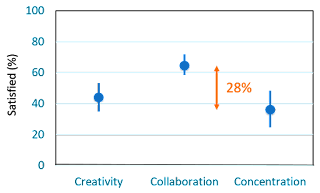 In my own survey dataset of 9,450 responses across 84 buildings, satisfaction with how the workplace supports collaboration is 72% on average. So, it appears the design industry is doing well at bringing people together to share ideas and develop them jointly. However, satisfaction with support of creativity and concentration is lower and certainly needs more attention. Don’t forget concentration is likely to be related to contemplation which is fundamental part of the creative process.

In summary, as an industry we still tend to focus on designing for collaboration, the funky bits. For survival, we also need to facilitate creativity and to do that we need spaces for concentration and contemplation. We need to provide places that foster mind wandering and attention restoration – biophilic design is a good start. We also need accept that mind wandering and contemplation is part of the day job and allow our workforce the time to do it. Next time you see a colleague day dreaming, then let them get on with it without disturbance, they may just be coming up with the next big idea. We all need time and space to think.