Offices of the Future – Green or (Depressingly) Blue 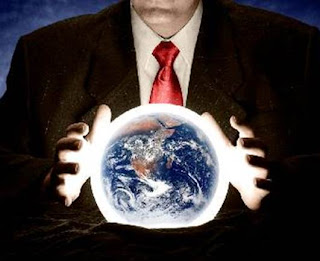 I have been asked to present on Offices of the Future at the Sustainable Futures event hosted by Carbon Smart. This blog represents what I intend to say.

First of all I am not a futurologist, I am a psychologist. I can no more predict the future than I can read your mind. But I can give you my views on the future of offices based on current workplace trends. You might even accuse me of wishful thinking as my views represent the way I hope offices evolve.

Before we consider the future I would like to reflect on the past and the history of the office. At the tail-end of the renaissance in the mid-17th century coffee houses flourished as a place of networking and business. The lack of alcohol made it a more suitable place for commerce than the already popular ale houses. By the 18th century there was a move towards the merchant’s counting house. This was mostly due to an increase in global trading and the need for clerks to keep and share ledgers and records. The clerks used bureau style desks for their paperwork. The increased need for central filing, the invention of the phone and typewriter in the late 19th Century all contributed towards the pollination of the desk as the primary work-setting. Management techniques such as Taylorism in the early 20th century initiated the congregation of these desks in large open plan offices.
So we come to 21st century and you might think not a lot has happened with office design. Despite computers and phones being mobile devices, most of us are still reliant on the desk. But it is only the desk, that wooden surface, that has not changed.

Meanwhile let's implement flexible working to save space, money and carbon whilst increasing staff satisfaction and productivity.
Posted by oseland at 10:20