Cs of Change at Macquarie Bank 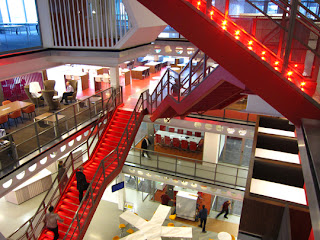 Yesterday I attended a tour of Macquarie Bank’s new offices in Ropemaker Place, organised by Unwired and hosted by Nigel Bunclark of the bank.

Nigel explained the brief for Macquarie’s new offices was “not just about sweating the asset but also about creating Community and Connectivity”. The vision was that enhanced Connectivity would lead to Collaboration and growth in business. The bank was also Consolidating from several offices into one and creating a new front door and much improved Client-experience.

Connectivity was created by taking the brave decision to punch a hole through a grid bay (9 x 13.5 m) in the slab of each of the six floors occupied by Macquarie. The atrium forms the “meeting tree” where a “red ribbon”, Escheresque, staircase connects all floors and box meeting spaces jut into the atrium, a design trick borrowed by Clive Wilkinson Architects from the bank's Shelley Street offices in Sydney which they also designed. It seems to work, there were certainly plenty of people milling around and networking on the staircases and pantries.

The pantries are located on each level, in the common areas, and well-stocked with cereal, bread, fruit and spreads including, of course, vegemite. I was surprised and pleased to see toasters in use – how many FMs say we are not allowed toasters. The pantries are there not just to foster serendipitous interaction and a great sense of Community but, by appeasing the population of grazers, also mean that the staff “stay in and build relationships and make more business” rather than waste time seeking snacks outside.


Coffee, the best flat white in particular, was another big design concern. The staff restaurant has the right coffee machine and trained baristas but it was the eclectic collection of furniture and settings that impressed me. A case of BA lounge meets Starbucks with a nice mix of soft seating, banquettes and I even spotted a bank of carrels for quiet work.
Another neat design trick used by Macquarie and Clive Wilkinson Architects was to take two retail units on the ground floor and convert them to their own street level front door and reception area. A seamless Connection to the lifts (helped through good design and a hole in the wall) meant that I thought Macquarie occupied the whole building rather than just the top floors (210,000 sq ft). The design theme of the ground floor continued to the reception area of the conference suite enhancing the Client journey and experience.
I asked Nigel if he included a potential increase in performance as part of the business case for creating the atrium, pantries and breakout spaces etc, but he said the business case stacked up based on the 22% savings property savings from the consolidation. However, I do hope he carries out a POE to show improvements in collaboration and business. Nevertheless, Macquarie are so confident that the business will grow that at the moment they only occupy 1,200 of the 1,500 desks provided and have expansion space for a further 250 desks (30,000 sq ft).

Members of the audience (especially Deutsche bank) were concerned that flexible working had not been introduced like in Shelley Street. Nigel explained that Shelly Street was basically one business unit whereas Ropemaker Place is made up of smaller units with Chinese walls and thus the desk reduction per small business unit is not as impressive as when sharing desks across one larger unit. I don’t believe Nigel needs to justify why the bank has not introduced desk sharing. The remit was to increase Community and Connectivity, and to keep people in building and get them to interact – flexible working is not the panacea for all organisations.

We were also told that the occupational density is also quite high, so it was not necessary to implement flexible working to gain efficiencies. The density was quoted as 11.2 m2/desk increasing to 9.6 m2/desk when the building is fully occupied and all space used. However, I am no mathematician (however I am a statistician) but the currently occupied 180,000 sq ft accommodating 1,200 staff equates to approx 15 m2/person and the full 210,000 sq ft accommodating 1,750 staff equates to 12 m2/person – which is still okay for a bank. The layout can, however, accommodate desk sharing if required at a later date. I can’t help but wonder if they could have got away with four rather than six floors by implementing desk sharing, but as Nigel said it was no the remit and the business case stacked up.

The other thing I should mention, although it interests me less, is that the project was completed within 12 months. Apparently, this was mainly archived by going down the Alliance procurement route and would not have been possible under the traditional two stage route.

Some of you will know I am on a crusade to create workplaces that meet our psychological needs, see paper; I think Ropemaker Place goes some way to meeting such needs. There is a good sense of place and arrival, the space has great daylight ingress, the wayfinding and connectivity is superb, watering holes and social spaces are provided through the pantries, the staff are able to explore and choose different work settings, biophelia is met through a green feel to the building and a garden terrace and the floorplates are arranged as communities and sized to a human scale.

My only disappointment is that we were not allowed to take photographs, but I have since found a few published on the web. As we were leaving, one punter commented that “it doesn’t feel like a workplace”. This is indeed a nice compliment, especially for a bank, so long of course that business is improving. The project team seemed very proud of their space and so they should be (and so they should allow photos).
Posted by oseland at 11:22